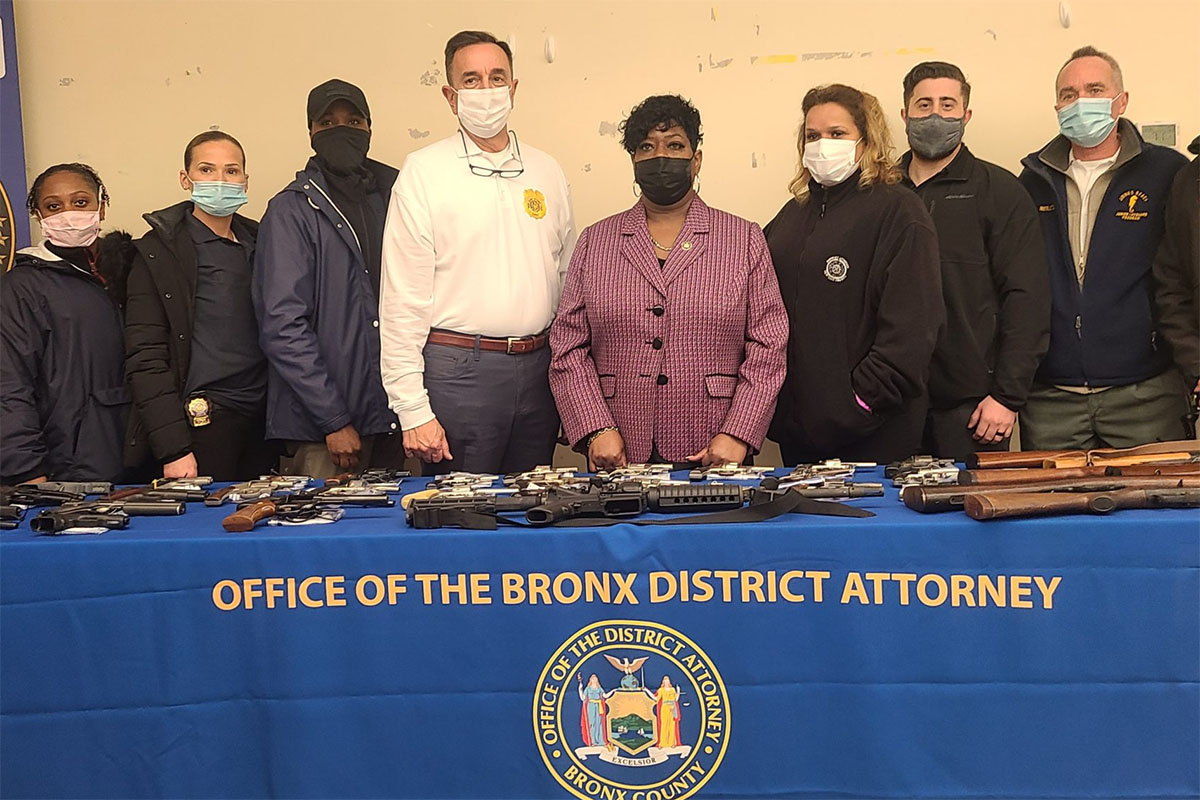 A gun buyback event held in the Wakefield section of the Bronx on Saturday, Dec. 18, which offered the highest dollar amount per gun to date in New York City, was successful in taking 70 guns off the streets, while also providing those who possessed them extra cash for the holidays.

The event was organized as part of a new gun buyback program launched in December 2021 called, “A Mother’5 Promi5e,” the brainchild of Eve Hendricks, mother of rising basketball star and tragic homicide victim, 17-year-old Brandon Hendricks, who, as reported, was fatally shot in what was reportedly crossfire in June 2020.

We’re making our community a safer place for our young people and families 🙏. 12.18.21 the Bronx Rising Initiative and our newest program A Mother’5 Promi5e, founded by Eve Hendricks, are partnering for a gun buyback program. Safer streets so we can rise together.#WeRiseTogether pic.twitter.com/BfzoQRUwHV

A Mother’5 Promi5e was created in honor of Brandon and according to its non-profit partner, Oyate Group, serves as a safe haven, breaking cycles of violence and crime. It offers programming and mentorship for youth and guidance for parents and families to transform the lives of young people and provide them with pathways away from violence. It also works with local leaders to reform public safety for underserved communities and to impact policy around gun safety. 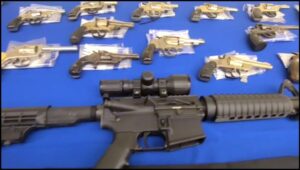 An assault-style weapon and handguns were turned in during a gun buyback event organized by A Mother’s Promise and the Bronx Rising Initiative at Butler Memorial United Methodist Church in Wakefield on Saturday, December 18, 2021. Photo courtesy of the Bronx District Attorney’s Office

As previously reported by Norwood News, Brandon had just graduated high school when his life was cut short by a gunman who fired into a crowd on Davidson Avenue in the Morris Heights section of the Bronx on June 28, 2020. Bronx District Attorney Darcel D. Clark announced on Sept. 22 that a Bronx man, Najhim Luke, had been charged with second-degree murder and additional charges in connection to the incident. His case is pending and he is due back in court on Feb.28, 2022. 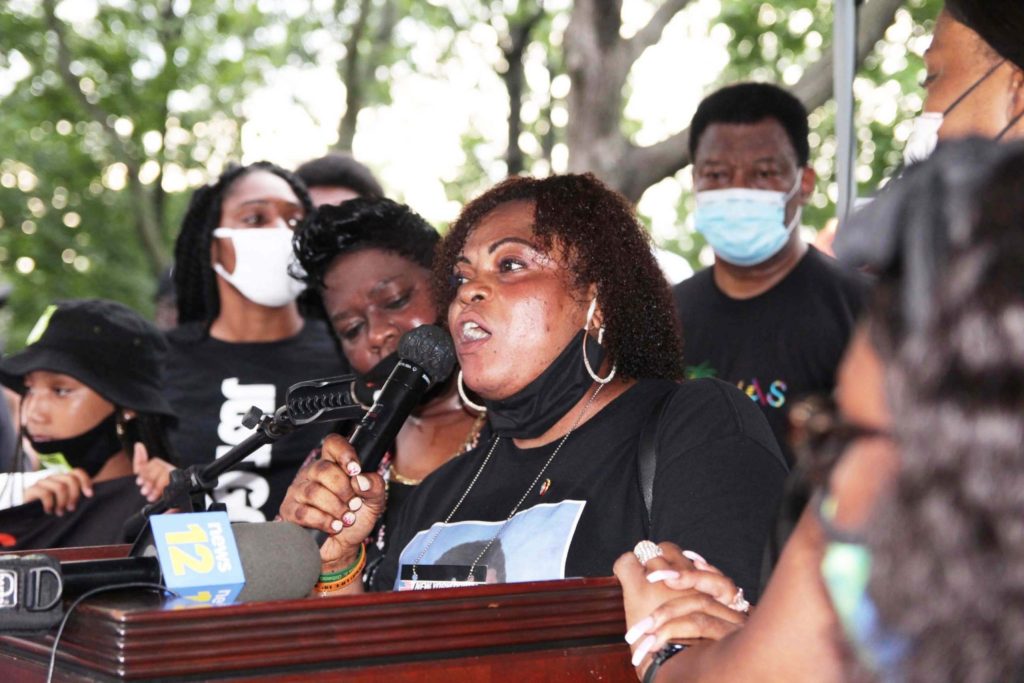 Eve Hendricks, mother of 17-year-old Brandon Hendricks, who was shot in June 2020 address the crowd at after A March to End Gun Violence in the Morrisania section of the Bronx on July 23, 2020. Photo by Síle Moloney.

Last year, we also reported on a rally, held in July 2020 and organized by Clark, to highlight the plague of gun violence in the Bronx, during which Eve Hendricks addressed those present and called for an end to senseless shootings. During that event, Brandon’s mother said, in part, “We’re all accountable. We are all responsible for each and every death because we are not protecting these kids properly. We’re not finding things for them to do. We’re not. So, government, you got work to do. We’re not just talking – action! And like I said, until the day I die, I’m going to hold you accountable.”

Meanwhile, the latest gun buyback event was held at the Butler Memorial United Methodist Church, located at 3920 Paulding Avenue in the Wakefield section of the borough. Those who turned in a working weapon received between $50 for a BB gun or imitation gun, and up to $500 for a gun or assault rifle. Those turning in a weapon received payment by way of a Visa gift card. A BB gun is a gun that uses air pressure to fire small metal balls called BBs. 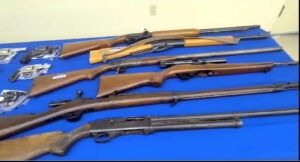 Six rifles and two shotguns were handed in during a gun buyback event organized by A Mother’s Promise and the Bronx Rising Initiative at the Butler Memorial United Methodist Church in Wakefield on Saturday, December 18, 2021. Photo courtesy of the Bronx District Attorney’s Office

According to Patrice O’Shaughnessy, director of communications at the Bronx District Attorney’s office, the event brought in a total of 70 guns that included one semi-automatic, assault style rifle, one computer-generated, 9-mm “ghost gun,” as well as 23 revolvers, 17 semi-automatic pistols, six rifles, two shotguns and 21 BB guns and air pistols.

Clark later told the Norwood News, “Getting these guns off the streets and out of homes saves lives. I thank Bronx Rising and the Mayor’s Office of Community Affairs and the NYPD for sponsoring this gun buyback.” A number of other gun buyback events, some organized by the Bronx District Attorney’s office, have also proved successful in recent months in reducing the prevalence of guns on Bronx streets. 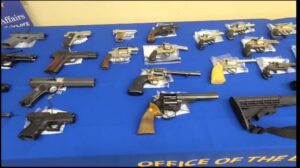 Those who turned in a gun received a gift card worth between $50 and $500 at the gun buyback event organized by A Mother’s Promise and the Bronx Rising Initiative at the Butler Memorial United Methodist Church in Wakefield on Saturday, December 18, 2021. Photo courtesy of the Bronx District Attorney’s Office

After the event, Cyrille Njikeng, managing director of the Bronx Rising Initiative, told Norwood News, “It was a very emotional, but very successful event.”

Bronx Rising officials said that, to date, in addition to the organization’s work in combating gun violence, it has also helped small local businesses that were looted or damaged during the civil unrest which took place in June 2020, and also assisted local hospitals expand their capacity and distribute the COVID-19 vaccine to residents.

Njikeng said of the gun buyback event, “Today was a very successful event; we had 75 guns taken off the streets. This is the first time we’ve done something like this.” Referring to Eve Hendricks, who Njikeng called “a good friend,” he added, “She wanted to do more for her son, for his spirit to stay alive, and we just jumped on it and created A Mother’5 Promi5e, and this was the first event of A Mother’5 Promi5e.”

Bronx Rising had already been awarding scholarships to high school seniors in Brandon’s name, as reported. Last year, it gave out $30,000 in scholarships, and this year the amount increased to $50,000. 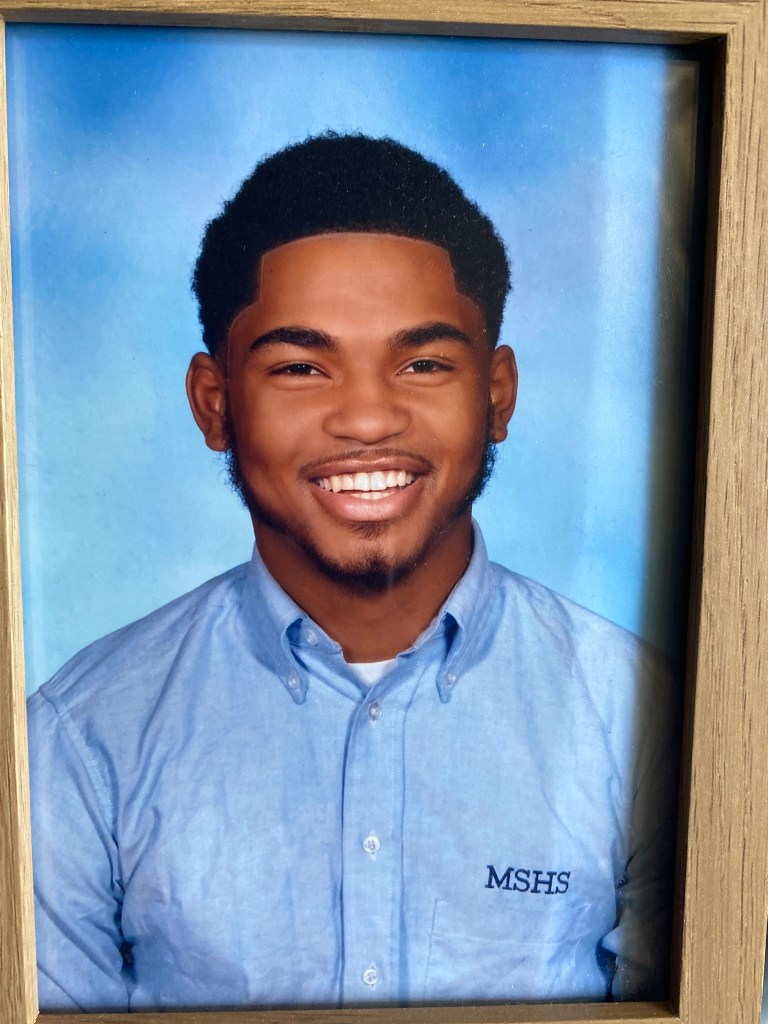 The Bronx Rising Initiative is funded by private donors, and is planning to hold other gun buybacks in the future. Njikeng concluded, “By doing this gun buyback, it was something we were looking forward to because Brandon got killed by a bullet that was not even destined for him.” He added, “So, we feel like we’re taking guns off the street, so we will have fewer young people killed from gun violence.”

A person arrested and charged with a crime is innocent unless and until convicted in a court of law.