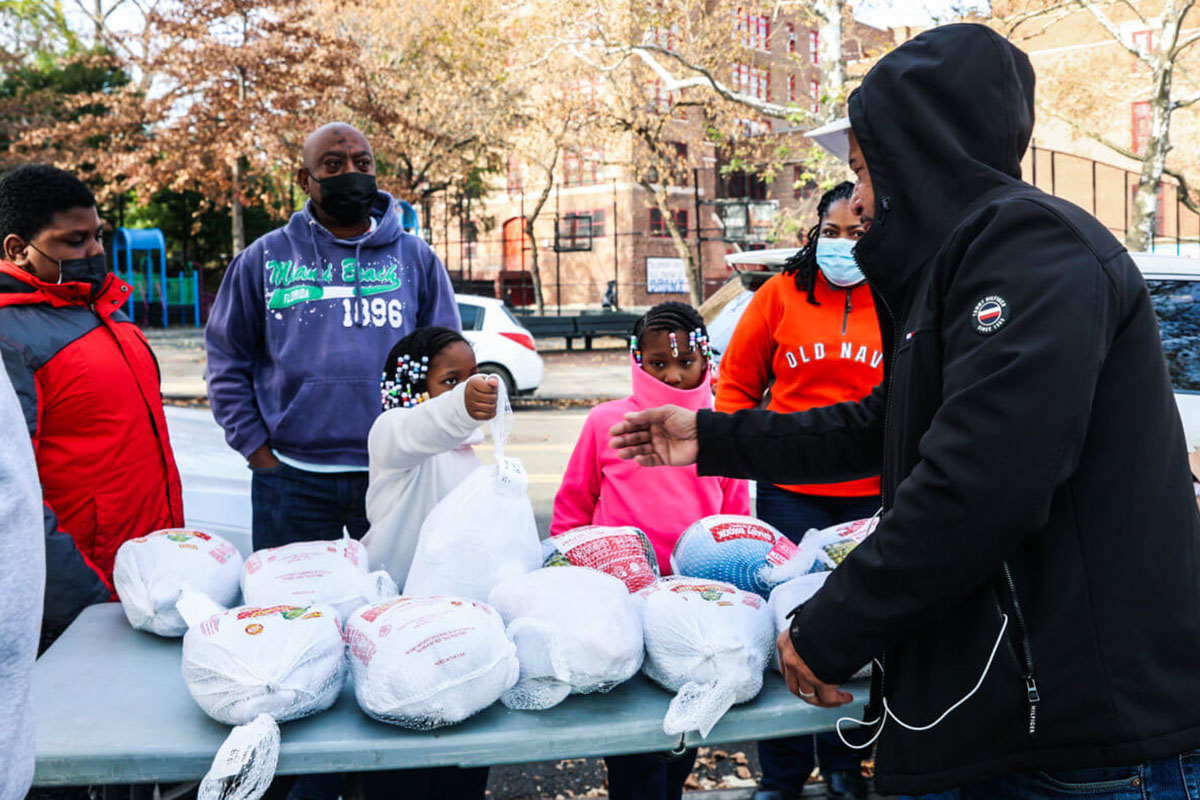 In the South Bronx — where 1 in 5 residents are currently experiencing food insecurity, the highest in the nation — food drives and food pantries are filling a vital role in the borough’s ecosystem.

Danelle Rogers, a single mother of three who lives in the Highbridge section, said receiving one of 300 turkeys being given away at Bill Rainey Park in the Longwood section on Saturday, ensured that she can give her kids a “proper Thanksgiving meal.”

“When COVID hit, I lost my job and couldn’t find a way to make payment on my apartment and feed my kids and myself,” she said. “There are days where it’ll be a McDonald’s week or a frozen pizza week, so to have a turkey dinner means a lot more to most.”

Food insecurity, a measure of the availability of food and individuals’ ability to access it, has been a prevalent issue for the South Bronx where more than 40% of its resident live in poverty.

“In my district, I have families that have many kids,” said Joyner at a food giveaway in Hunts Point. “I want to make sure no one is going hungry on Thanksgiving.”

In Hunts Point volunteers packed Thanksgiving dinners for thousands with the help of Baldor, a food distributor located in the South Bronx.

While the BronxWorks’ biweekly food pantry served nearly 200 families on Saturday, food pantries can only do so much, and lately, some haven’t been able to feed as many mouths. The BronxWorks pantry used to run every Saturday, but has since been cut back due to a lack of funding and staff.

“The pandemic shed such a bigger microscope on how food insecurity has affected the borough,” said Jason Autar, COO of Bronx Rising Initiative, a nonprofit organization dedicated to providing and distributing critical resources across the Bronx. “Anecdotally, we’ve seen a rise in food pantries and food drives, but we’ve also seen a rise in those who do not have accessibility to fresh food.”

The Bronx’s rank as the hungriest borough is affecting nearly all age groups, including 35.8% of all Bronx children, nearly 18% of working adults, and more than 21% of older residents (60-plus) experiencing food insecurity.

The consequences of food insecurity are dire: Studies show that children without consistent access to food are more likely to experience language, motor skills and behavioral challenges. People who are food insecure are also disproportionately affected by chronic diseases such as diabetes and high blood pressure — putting them at even greater risk of contracting COVID-19.

Statewide in New York, during the pandemic, the number of people who “didn’t have enough to eat” soared to 6.1 million in April 2021, but dropped to about 2.7 million by September 2021, according to U.S. Census Household Pulse data.

The 56% drop in food insufficiency in New York State coincided with a massive boost in federal food and cash aid. From May 2020-August 2021 alone, federal spending on the Supplemental Nutrition Assistance Program (SNAP) — half of all South Bronx households receive SNAP benefits — nearly doubled, from $362 million-$693 million monthly.

The use of SNAP benefits, or food stamps, is an indicator of food insecurity; the majority of households that receive SNAP are food insecure.

Gov. Kathy Hochul announced in mid-November as part of increasing benefits for SNAP participants, all New Yorkers involved in the federal program will receive the maximum allowable level of monthly food benefits, plus an additional allotment of at least $95.