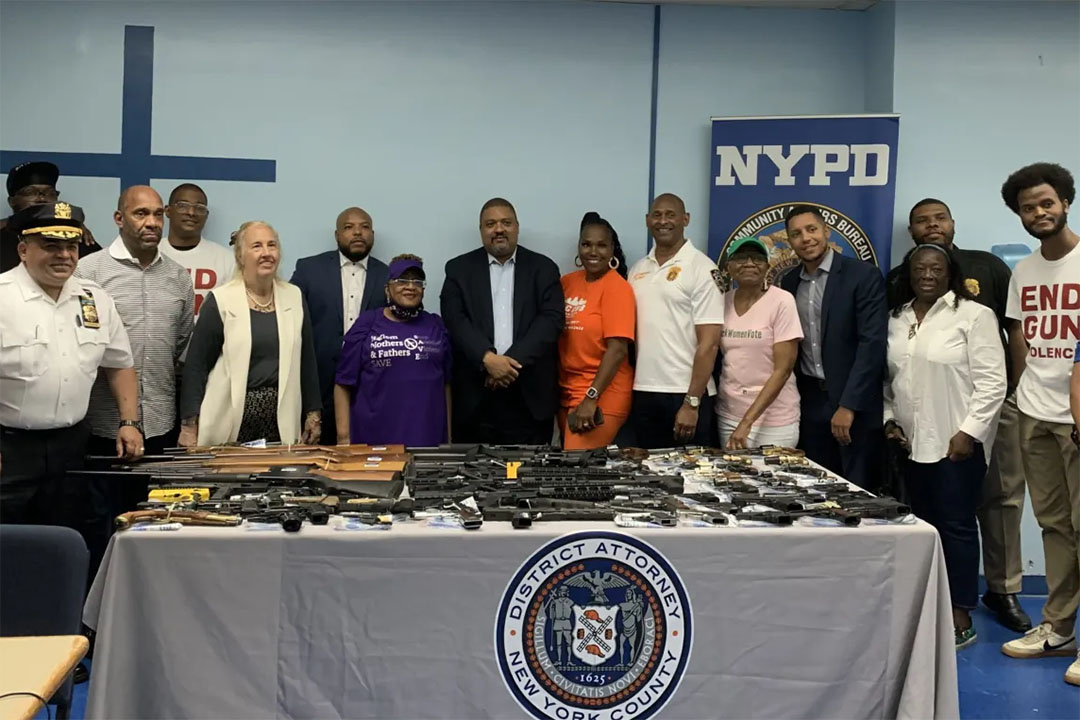 By the time doors closed at 4 p.m. at Soul Saving Station church in Harlem this past Saturday, 78 firearms ranging from peashooters to semi-automatics were collected from Cash for Guns, a buyback event hosted by Manhattan District Attorney Alvin Bragg’s office.

Those who handed in a gun (or imitation gun) received an “untraceable” prepaid Visa gift card from the Oyate Group, a local anti-poverty nonprofit running its third buyback program. Operable guns or assault rifles were swapped for $500 certificates while rifles and shotguns were exchanged for $150 and BB guns and imitation guns netted $50. Anyone could turn in a firearm, with the process entirely anonymous and confidential. The collected weapons are set to be melted down by the NYPD at an undisclosed location.

“[The guns] will never see the light of day again,” said Jason Autar, the chief operating officer of Oyate Group. “These guns are not inspected, they’re not busted. The serial numbers are not investigated upon it. Once they’re turned in, that’s it, it’s done.”

According to Autar, Saturday’s event was the most successful one yet. He credits outreach from credible messengers, advocates who employ their personal experiences with incarceration and gang-violence towards mentoring youngsters most dramatically affected by those issues. Additionally, organizers believe hosting the event at a church such as Soul Saving Station rather than at a police station helped put those looking to turn in a gun at ease. Given the amount of firepower surrendered, the NYPD was present, but largely blended in with the wallpaper for most of the event.

As Bragg looks to prosecute the city’s most prolific weapons traffickers, Saturday’s program reminds him of the importance of addressing gun violence before it reaches a courtroom.

“We also want to be on the prevention side,” said Bragg. “So with [the] gun buyback today, getting about 70 guns off the street makes Manhattan safer…makes Harlem safer.”

Tandy Lau is a Report for America corps member and writes about public safety for the Amsterdam News. Your donation to match our RFA grant helps keep him writing stories like this one; please consider making a tax-deductible gift today by visiting:https://tinyurl.com/fcszwj8w..