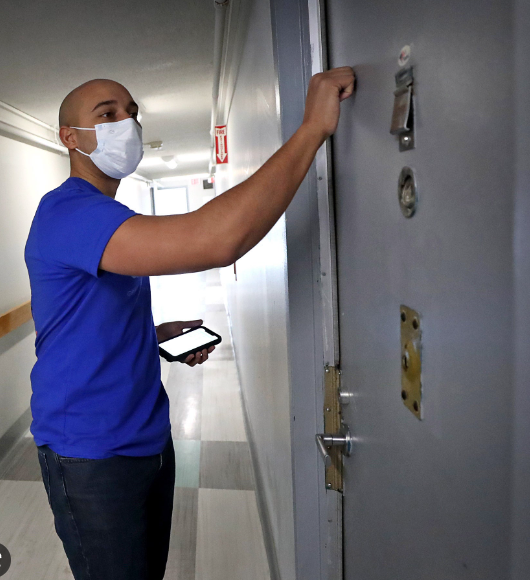 People Are Now Going Door-To-Door To Reach Vaccine Skeptics. Is It Working?

As of May 20, 37.8% of the U.S. population has been fully vaccinated. But even though all Americans over the age of 16 are now eligible for the COVID-19 vaccine, there are still many skeptics: One study showed that nearly one out of every four Americans doesn’t plan on getting jabbed, for a variety of reasons. There are people who worry about side effects, and those who have fallen victim to misinformation around potential health risks that don’t actually exist. There are some people who worry the vaccine was authorized too quickly, and even some men who think protection from a deadly virus is unmasculine. Then, there are people who just have no idea how to go about signing up for a vaccine in the first place.

To combat skepticism, rampant anti-vax conspiracy theories, and general confusion surrounding the shots, people across the country are now going door-to-door to meet with those who are still skeptical about the vaccines. “Our goal is to get as many people vaccinated as soon as possible with equity front and center,” Vicky Kovari, executive director of the Detroit 2020 Census Campaign and head of Detroit’s vaccine outreach campaign, told Michigan Radio. “We’re not ignoring any neighborhoods and we’re really intent on making sure people know this is easy, it’s safe, and it’s important.”

Organizations in a variety of communities run these types of campaigns. None of these groups are trying to push or force people to get the vaccine — it’s all about information and trust. But many people still aren’t receptive, said Tomas Ramos, CEO of Bronx Rising Initiative in New York. Ramos told The New York Times that some residents don’t open their doors, or they just shout, “I’m not getting vaccinated!” from inside their apartments.

Despite the U.S.’ relatively fast vaccine rollout, there are still major racial and socioeconomic disparities — although canvassers are trying to change that.

“Everybody is convinced social media is the way to reach people, but if you want to really, really reach them, you have to see them, talk to them, find out what’s on their mind, hear their stories,” organizer Monica Dorsey told Arizona Central. “It’s so important, and it is effective. And we’ll stay at it until percentages get where they need to be.”