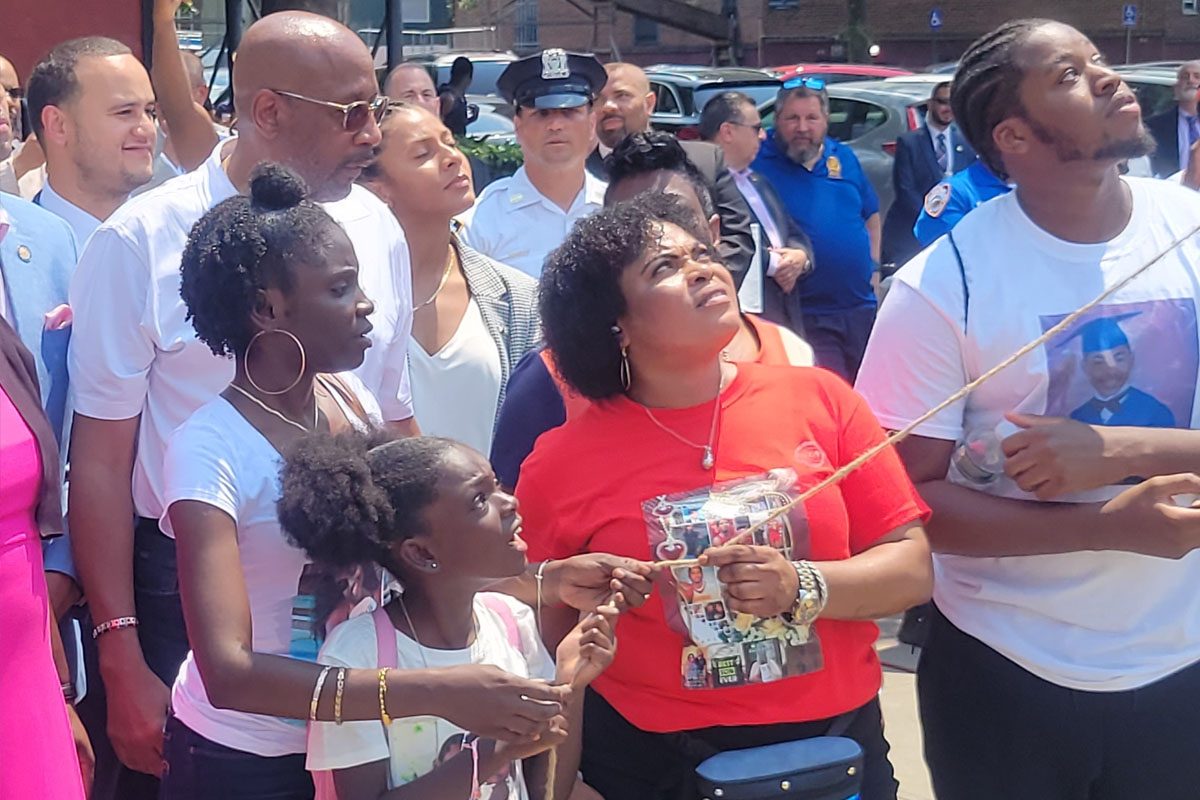 Brandon Hendricks, the standout basketball player from James Monroe High School who was fatally shot in June 2020, was memorialized last week, on the corner of Melrose street where he grew up. On July 7, the intersection of 156th Street and Park Avenue was co-named “Brandon Hendricks-Ellison Boulevard” near Andrew Jackson Houses where he lived.

Hendricks was struck in the neck while attending a friend’s birthday barbecue on Davidson Avenue in Morris Heights, by a bullet intended for someone else. He succumbed to his injuries just days after graduating from high school and a week before his 18th birthday.

The way to reduce gun violence, Gibson said, is to “deal with it from a holistic healthcare perspective,” by investing in “programs for young people, like jobs and mentoring, safe spaces, community centers. Give them options better than what they had seen beyond the four corners of their neighborhood. They don’t have to be a victim of their circumstances.”

Hendricks’ former coach, Chris “Glasses” Salgado, said that Hendricks’ memory will motivate the James Monroe Eagles next basketball season, on and off the court.

“It just proves that as a kid in the inner city, you could be great and you could be legendary, at whatever cost,” said Salgado. Hendricks’ “his character and determination were able to get him to where he was at. And even after he’s gone, everyone still remembers him for what he always did.”

The Bronx Rising Initiative, a coalition of local groups whose aim is to provide and distribute resources borough-wide, created a scholarship named after Hendricks, to be awarded to 10 college-bound high school seniors. Each award is for $5,000. This year’s winners were announced after a basketball game between community members and students from James Monroe at the just-opened basketball court at Jackson.

“Brandon was a consistent source of hope and inspiration for everyone that knew him and had recently been accepted to college with a full scholarship. The scholarship exists to honor his memory and uplift his peers,” Bronx Rising Initiative announced in a press release.

Since the time of her son’s death, Eve Hendricks has become an outspoken advocate for curbing gun violence. During the renaming ceremony, she and other family members noted that no water guns or nerf guns were allowed inside their home when Brandon was growing up.

Hendricks’ older sibling, Tonya Downer, said the past year has been a “rollercoaster of emotions.” But as daunting as each passing day has proven to be, her mission is clear.

“We don’t want to see other parents grieving like this,” she said.

The posthumous accolades for their son and brother “makes us feel prouder of Brandon and yet it hurts even more.”

The NYPD arrested a suspect in connection with the case. Najhim Luke, 23, of Walton Avenue, has been charged with murder, manslaughter and criminal possession of a weapon.