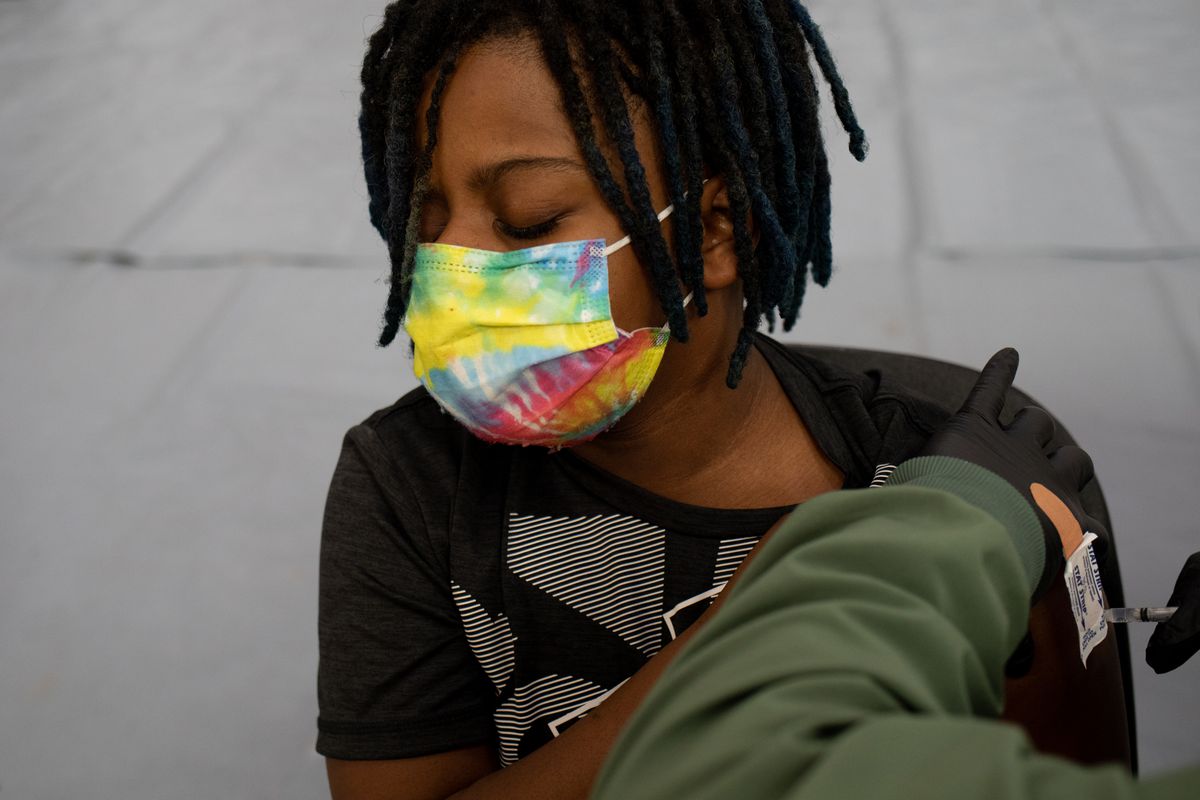 With vaccination disparities by race and class in NYC schools, officials look to boost access

New York City is renewing efforts to get more public school children vaccinated against COVID, with new pop-up clinics at schools where rates are low, and an information blitz consisting of robocalls to parents, fliers sent home in backpacks, and town halls with public health officials.

The push, announced Thursday, comes as child vaccination uptake has stalled while recently released data shows gaping disparities among schools. Just over half of students are fully vaccinated.

In elementary schools, 34% of students are vaccinated. The rate ticks up to almost 52% in middle schools, and over 57% in high schools, where students have been eligible to receive the vaccine for much longer. That is according to a Chalkbeat analysis of city data from Feb. 22.

A three-week vaccination campaign will begin March 21, officials said, with pop-up clinics at 20 schools each week. Parents will be informed through letters sent home by principals. The city is also holding virtual town halls on March 14 and 16, with translation provided via call-in numbers upon registration (Spanish, Mandarin, and Arabic for the first one, and Spanish, Cantonese, and Bangla for the second).

“Vaccination continues to be our key to keeping COVID-19 numbers low and protecting our loved ones from serious illness,” Mayor Eric Adams said in a statement.

The question is whether the city’s latest push can help move the needle much. Public health officials and organizations leading outreach campaigns say they are up against a wall of distrust and misinformation, healthcare access issues, and other roadblocks. Navigating around them often requires one-on-one conversations, led by people parents can relate to, and tailored to unique concerns of different communities.

Health officials may face particularly tough hurdles given recent news that the vaccine is not as effective at preventing illness among children and adolescents, though it still provides protection against severe illnesses and death.

“It’s important, though, to just not give up,” said Dr. Michelle Nichols, an associate dean at the Morehouse School of Medicine. “Because there are children who are still getting sick or hospitalized unnecessarily.”

Many experts said that it will take more personalized and sustained efforts to convince parents to have their children vaccinated.

“You can’t just go in there and say, ‘I’m offering vaccines today, and you can come in,’ and not have that education portion there,” Nichols said. “People do trust people who look like them, act like them, have the same backgrounds… you do have to meet people where they are.”

Crystal Williams understands what makes people hesitant to vaccinate their children. The mother of 11 lives on Staten Island, which has the lowest public school vaccination rate of any borough at 47%. Two of her children attend school in Brownsville, Brooklyn, where just 38% of students in the district have received at least one vaccine dose. And she volunteers in Brooklyn’s P.S. 25, where only 12% of children have gotten the shot.

“They just tell me that they’re scared,” she said of other parents she talks to. “I try to encourage them that it’s nothing to be scared about.”

Her 15-year-old daughter got vaccinated in order to play school sports. Seeing that she didn’t have a negative reaction helped Williams feel comfortable enough to vaccinate the rest of her children who were eligible.

Williams said she hopes the city will reconsider using incentives such as gift cards to help persuade reluctant parents.

Dr. Carmen Garcia-Albarran said that access to accurate information about the vaccine has been a huge barrier to getting more shots in the arms of children. She is a pediatrician with Somos, a network of doctors who work with low-income patients in diverse communities.

Once families have a conversation with her, in their native language of Spanish, they usually trust her advice, Dr. Garcia-Albarran said.

“It’s really important that we explain this to the parents: ‘We’re not injecting the virus into your child. It’s safe,’” she said. “No one is going to give their children the vaccine if they don’t understand what’s in the vaccine.”

Jason Autar, who helps lead the anti-poverty nonprofit Oyate Group, has been bringing vaccinations to low-income communities like the South Bronx and Washington Heights. The organization helped organize a handful of pop-up clinics at schools. After an initial show of enthusiasm, few parents are vaccinating their children now, he said.

Autar thinks it’s a combination of people being skeptical of the vaccine, thinking they don’t need it because they’ve already gotten COVID, and not having access to medical care.

Interest has waned so much that the organization is now winding down its vaccination push, shifting gears to providing other services.

In the face of the current hesitation he’s seeing, Autar said that schools could play a major role in breaking through to more parents.

“Obviously, parents send their kids to school from 8 a.m. to 5 or 6 p.m., if they have an extended day. So schools are a trusted entity within the community,” he said. “I think they are a prime institution to continue these COVID relief efforts.”