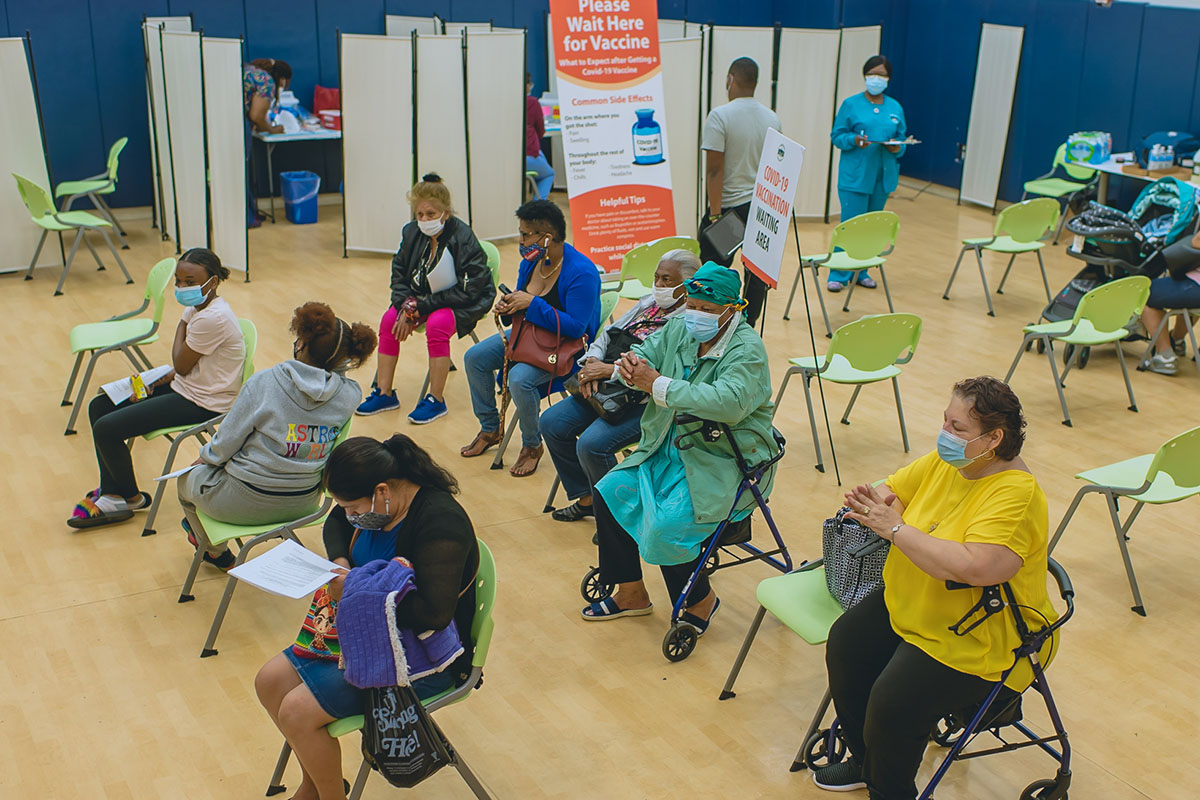 Toshiyuki Sumi, a New York correspondent at the Mainichi Newspapers, a Japanese daily newspaper, visited one of The Bronx Rising Initiatives vaccination events. (See Translation Below)

COVID-19 RACIAL DISPARITIES IN U.S. VACCINATION RATES: 30% OF BLACK NEW YORKERS AND 40% OF LATINO AMERICANS — “THE GOVERNMENT IS KILLING US”

Infection numbers are on the rise again of the new Delta variant of COVID-19, which is said to be highly contagious. Vaccination has become a political issue closely tied to an image of white conservative naysayers. However, racial disparities are becoming apparent, because it is in fact the Black and Hispanic (Latin American) populations currently who are experiencing the lowest vaccination rates.

“Everybody’s saying that if you get the vaccine, a few years later your body’s going to experience abnormalities. So I was suspicious of it too.”

It was the end of June in the Bronx, New York, where temperatures had risen to a scorching 100 degrees. Hispanic middle-schooler Jaslady Quiñones (15) and her mother had come to get vaccinated at the vaccination site inside a tent erected in a church parking lot.

She had been influenced by the false rumors being spread all around her. At the beginning of May, she and her mother both tested positive for Coronavirus. They suffered headaches and chest pain, with persistent coughing. For two weeks, Jaslady and her mother quarantined for two weeks at home in rooms isolated from family members.

“We want to be near our family without worrying about giving them Corona.”

She changed her mindset and decided to get vaccinated. Although, among her family members, an aunt is refusing to get the vaccine.

As of July 19th, 54% of New York is reported to be fully vaccinated (including the second dose) but there are racial gaps in the statistics. Asians stand out at 69%, and Whites at 45%. Meanwhile, Latin residents are 40% vaccinated, and the Black community is at a stagnant 30%. Despite experiencing higher rates of COVID-related deaths since before vaccine production, there is a growing reality of lower vaccination rates.

One of the reasons is false information.

“The government is trying to kill Black and Latinx people”

“People of color are being used as guinea pigs”

“They’re going to implant microchips so they can track us”

The Bronx is an area with a large Black and Latinx population, but such misinformation has been contagiously spreading by way of mouth among friends and family.

“Unfortunately, conspiracy theories tend to permeate the areas and communities where people do not understand the real danger of conspiracy theories. It directly attacks the people who are most vulnerable and most in need of the vaccine.”

points out, “The lack of access to accurate information and lack of nearby medical care—this connects to poverty.”

In the background, there is a deeply-rooted distrust of doctors and government among the Black and Latin communities. Due to a large number of people without medical insurance, few people have ever received hospital care. Large-scale medical institutions are centered in Manhattan, where there is a prominent wealthy class. Medical care seems worlds away.

There is a history of Black Americans being used as “guinea pigs” for syphilis research from the 1930s to the 1970s, and there are many people with a strong distrust in the government and medicine.

“Even though I can say ‘Ok, we have the vaccine’ to people who don’t normally receive medical care, to people who are skeptical,” Autar says, “the reality is that it’s hard for people to believe that right away.”

Vaccination side effects such as fever are leading people to hesitate. In New York State,

employees are allowed up to four hours of paid time off. Nonetheless, in low-income

communities, most people work hourly-wage jobs where paid time off is not part of the picture. Many restaurant workers cannot afford a living without the income from tips.

Lamonte Vignaud (29), a Black delivery worker in central Manhattan is being urged by his

family to get vaccinated, but he is still undecided. “If I have to take a couple days off because of the side effects, my income will be that much less. That’s a few hundred dollars, gone.”

While vaccination rates are hurting the Black and Latinx populations, vaccination is a heavily politicized topic that has been influenced by partisan conflict. Christian charity worker Richard Espinal (47) says, “The staunchest opposers of the vaccine are conservative white people. Black and Latino people are definitely suspicious of getting vaccinated, but there are many different kinds of social gaps that are at play.”

As a result of the spreading Delta variant, the number of new COVID-19 cases is increasing yet again. In mid-June, the daily U.S. average (of seven days) of new cases had gone down to 11,000, but by July 18th, it has risen back up to 31,000 cases. Until early July, out of a week’s worth of positive COVID-19 cases, 69% was attributed to the new Delta variant—an 8% increase since the beginning of June.

Bronx Rising Initiative’s Autar explains, “What we need to do is to reach out to everybody one by one, and convince them to believe in the need to get vaccinated. It takes patience.” What concerns him most right now is, “not being able to get enough people vaccinated in time for winter [when the virus is said to be most easily transmitted]” with the possibility that things will take longer than expected.