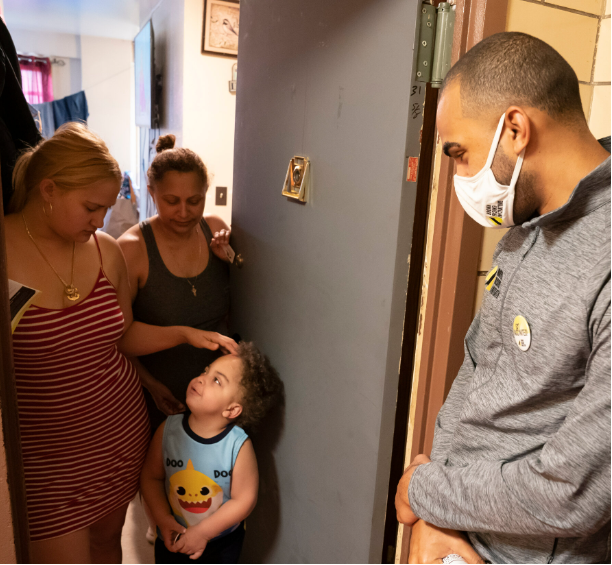 They’re Reluctant to Get Vaccinated. Will a Knock on the Door Help?

As demand shrinks, the city is turning to door-to-door outreach to overcome vaccine skepticism. “Nobody I know took the shot,” one man said.

On a recent morning, Tomas Ramos, a community organizer, and two colleagues rode the elevator to the 21st floor of a tower in the Webster Houses, a public-housing project in the Bronx. Working their way down, one floor at a time, they knocked on every door. Sometimes a voice from inside an apartment called out, “I’m not getting vaccinated.” Other times the person behind the door simply went silent after Mr. Ramos, 34, explained he was signing people up for vaccinations.

But on the 13th floor, Biency Paulino answered the door, flanked by her mother and her 5-year-old son, Christopher, who giggled at the sight of strangers during such a lonely year. “We didn’t leave this apartment for two and a half months,” Ms. Paulino, 30, explained, saying her family had been extra-cautious.

New York City’s vaccination campaign has been successful by many measures. The city’s second wave is receding fast. Pandemic restrictions are loosening. About 59 percent of the city’s adults have received at least one dose. But Black and Hispanic New Yorkers are getting vaccinated at significantly lower rates than other groups. Citywide, only about 33 percent of Black adults have gotten a vaccine dose. For Hispanic adults, the rate is 42 percent. And demand for the vaccine is dwindling.

The racial disparities are partly the result of access, with more robust health care and vaccine distribution in some neighborhoods than others. But resistance to the vaccine, which has been well documented in conservative rural areas, also runs strong in major cities, including New York, the epicenter of the pandemic just a year ago.

New York City public health officials are now trying to reach out to unvaccinated New Yorkers individually. They are urging community groups to start knocking on doors to persuade people to get vaccinated, as Mr. Ramos’s organization, the Bronx Rising Initiative, has been doing for months. Those who agree get appointments for vaccine shots in a temporary clinic nearby. Editors’ Picks And the city has also hired companies to do door-to-door outreach and talk up the vaccine on street corners, largely in Black and Hispanic neighborhoods.

One contract went to a Virginia firm that worked on Defense Department contracts in war-torn countries before expanding into contact tracing. Some of the companies have little public health experience, including one owned by a recent New York University graduate who usually works on political campaigns.

From May through September, the city anticipates that these firms will send about 700 people a day to knock on doors and do street outreach in the hopes of reducing racial disparities and increasing overall vaccination rates, which are key to reopening efforts. City officials say they anticipate that much of the outreach campaign’s costs, which could be up to $60 million, will be reimbursed by the federal government.

Skepticism about the vaccines’ safety is a significant factor contributing to hesitancy, especially among Black New Yorkers, interviews with more than 40 Black and Hispanic residents across the city show.

“We’ve been able to move the needle,” Dr. Torian Easterling, the city Health Department’s chief equity officer, said. “Not as far as we want.” Anthony Lopez, 41, a Black man who coaches basketball and is studying to become a youth counselor, lives in the largely Black neighborhood of Jamaica, Queens, where the vaccination rate has hovered around 40 percent. He said he did not plan to get vaccinated anytime soon, nor did his friends.

“Nobody I know took the shot,” he said.

He added: “I’ll definitely be waiting until more people take it, and they’ll probably make some changes to it, and maybe I’ll be able to make a better decision in a couple of years — not now, though.”

Mayor Bill de Blasio has played down fear and distrust as factors that keep people from getting vaccinated. “It’s not about hesitancy, it’s really about convenience,” he said last month, suggesting that many people had given up on getting an appointment amid crushing demand earlier this year.

When Moderna announced that it was preparing booster shots to lengthen immunity and increase protection against variants, many New Yorkers took it as good news. But across the Bronx — which has the city’s lowest vaccination rate — the news struck many as proof the current vaccines weren’t so effective. “People don’t want Moderna because they say you’re going to need a booster shot,” said Manny Diaz, an unvaccinated hotel worker, who lives in the North Bronx. He said he was willing to get the Pfizer vaccine — whose plan for a booster shot seems to have received less attention — but didn’t know where to get it. Others said they have made up their minds against the available vaccines. In interviews, some men described baseless conspiracy theories that the vaccine contained poison or could be used to track them. Mr. Ramos, the community organizer, said the most stunning moment for him came in the courtyard of a housing project in the Bronx when he told a group of children to encourage their grandparents to come down and get vaccinated. A girl of about 8 years old shot back: “My mom said, ‘They’re putting something in the vaccine to kill people,’” Mr. Ramos recalled.

To combat conspiracy theories, the city’s health authorities said, they have held over 1,000 community events and have blanketed the city with advertisements and fliers. The city also has a team that searches for vaccine misinformation online to know what needs to be countered.

But many residents unswayed by conspiracy theories still worried the vaccine had been rushed and that a full picture of the side effects had yet to emerge.

These doubts run deeper in Black neighborhoods for reasons that include a long history of doctors’ treating Black patients differently from white patients as well as past medical experimentation on Black people.

“I can’t see how we as Black Americans can rush into taking anything that was developed so quickly,” said Jarrell Hughes, the program director at a community center in the Soundview section of the Bronx. “I can’t go on the fact that my government is saying it’s safe,” he added. Daniel Barber, who has lived 50 of his 52 years in the Jackson Houses in the Bronx, is the top tenant leader in New York City’s sprawling public housing system, representing more than 400,000 New Yorkers. In December, as vaccinations began, Gov. Andrew M. Cuomo appointed Mr. Barber, who is Black, to a task force intended to help Black and Latino communities get vaccinated. Since then, almost 4 million New York City residents have received at least one dose. But not Mr. Barber. He considered getting vaccinated, until he read that a few vaccine recipients developed rare blood disorders or blood clots in the brain.

“I’m not willing to put myself or my family up to be guinea pigs,” he said, adding that he had little faith in government assurances about the vaccines’ safety.

Mr. Barber said many public housing residents — who are overwhelmingly Black or Hispanic — were skeptical of the vaccine because they had seen government indifference or deceit up close. Arguing with the public housing authority about basic repairs to decrepit apartments has shaped how they view government, he noted. “We don’t have any trust,” he said.

Black residents of the Bronx have had one of the city’s highest Covid-19 death rates and now have the lowest vaccination rate in the borough. About 32 percent of Black adults in the Bronx have gotten a dose — a little above half the rate of white Manhattanites and less than half that of Asians citywide.

One of his friends is encouraging Mr. Barber to get vaccinated, raising the topic every time they meet.

“I’m on him,” said Dorris Creager, 79, as she sat outside on a recent morning. A retired jewelry designer and tour guide, Ms. Creager lives in the Jackson Houses with her husband, her 99-year-old mother and their three adopted children, ages 9, 12 and 14. Recently her family’s Covid-19 precautions have eased, slightly. Her children no longer wear face shields in addition to masks. They attend school remotely and play outside an hour a day. Her youngest still gets annoyed when other children nearby aren’t wearing masks, she said. She has been vaccinated and urges all her friends to do the same. “It’s either that or you could go on a ventilator,” she said.

Public health experts say encouragement from a person’s social circle can help sway someone to get vaccinated.

Sometimes it does not even take that much.

Mr. Ramos listened attentively as Ms. Paulino stood in her doorway and described her fears.

“I hear in the news about the side effects from the second dose,” she said in Spanish. She said she knew someone who claimed to know someone who was hospitalized after receiving the Johnson & Johnson shot.

Mr. Ramos countered that there were bound to be “a few reactions.” He encouraged her to ask her doctor about the vaccine.

Then Mr. Ramos talked about other things. He asked Christopher if he liked Baby Shark. He asked Ms. Paulino where in the Dominican Republic she was from. Moments later, Ms. Paulino suggested that her mother — who was standing quietly beside her — should sign up for the vaccine. Then Ms. Paulino announced she would sign up too.

Mr. Ramos said some people just need a little reassurance, and to hear it from someone standing in front of them. “Those conversations go a long way,” he said.