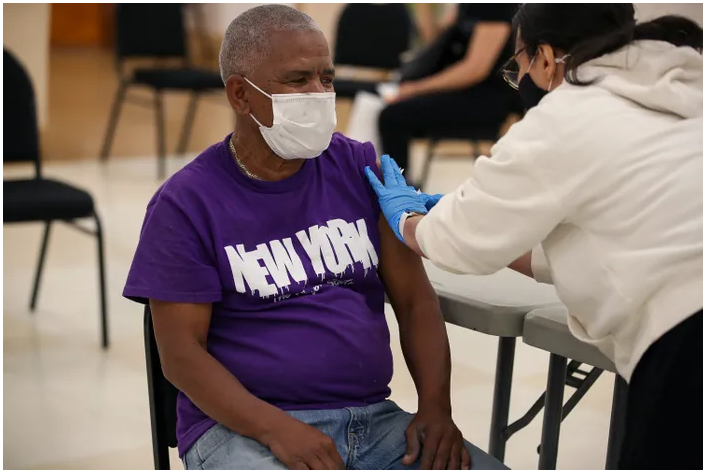 New York is emerging from masking and social distancing after 14 months of restrictions with newfound freedom from COVID-19 this week. By many metrics, the state is doing relatively well against the pandemic. The number of cases, hospitalizations, and deaths are all at lows not seen since early 2020, when testing for the virus was beginning. And after hitting the goal of having 70 percent of adults vaccinated with at least one dose, the state lifted nearly all COVID-19 rules on Tuesday. But the fireworks celebrating the milestone might be premature, with a highly contagious variant spreading through an unevenly vaccinated public.

Pockets of New York City, for example, are seeing lagging vaccination rates, especially in minority communities. According to the city’s data, Black adults are only 30 percent partially vaccinated, while Hispanics are 39 percent partially vaccinated, compared to 46 percent for whites and 69 percent for Asians. “It’s an enormous concern that we would still have a susceptible population,” David Abrams, a professor of social and behavioral health at New York University and a former National Institutes of Health official told Intelligencer. “It’s perhaps not a surprise that those neighborhoods at higher risk are often of lower socioeconomic status, immigrant populations, and non-English-speaking — more people of color.”

Organizations like the Bronx Rising Initiative, a nonprofit launched last year in the midst of the pandemic, have tried to address this disparity by bringing jabs straight to the largely Black and Puerto Rican enclave. “We understood from the jump that the borough was going to be the epicenter of the epicenter of the pandemic,” Jason Autar, COO of the nonprofit, told Intelligencer. The crux of the problem is access: People are having a hard time getting to vaccination sites, and those who are working without paid time off can’t easily get away from their jobs for a shot or to deal with side effects. Bronx Rising has brought vaccines into community centers, senior centers, lobbies, homeless shelters, and even street corners. The organization’s staff are from the Bronx, “so they are representative of Black and brown bodies that grew up there and understand these communities,” Autar added. “For us, that is the approach — it’s having outreach workers that are from the community that can become credible messengers.”

Governor Cuomo’s decision to lift restrictions on most businesses (although not public transit, schools, and health-care facilities) came on the same day that the CDC warned new cases were being fueled by the so-called Delta variant, first identified in India in March, and classified it a “variant of concern.”

The strain is 60 percent more transmissible than the Alpha variant first identified in the U.K. Described by some experts as “COVID on steroids,” the highly transmissible strain now accounts for 10 percent of cases in the U.S.

Back on this side of the pond, Autar told Intelligencer that New York’s easing of mandatory restrictions while a highly transmissible strain spreads through communities sends mixed messages to the unvaccinated: “Our leaders are indicating that, ‘Hey, we’re hitting that mark where we can all just go back to living comfortably as we did before,’” he said, adding that it could take the urgency off of getting immunized. “Things are opening up so quickly, our communities don’t have enough time to continue to educate themselves.”

What’s more is that partial vaccination is not very effective against Delta. Only 47 percent of New Yorkers are fully vaccinated and truly protected against Delta, and just 26 percent and 33 percent of the city’s Black and Hispanic populations, respectively.

Autar and other community organizers at the Bronx Rising Initiative are ready to take on the task. “With the weather being as nice as it is, we’ve pivoted from knocking on doors to actually being on street corners to really meet the demands of the community,” he said, adding they could easily talk to hundreds of folks walking by. “That’s really meeting the community where they are.”